We have a special treat for you today as we proudly unveil a guest post by International Master Richard Palliser on the subject of The Iron English – Updated!

This is the Chessable course on the English Opening (1.c4) which Richard co-authored with Grandmaster Simon Williams. The course was shortlisted for the prestigious Chessable Course of the Year Award for 2020.

Richard somehow found the time from editing CHESS Magazine to examine recent games from two key lines of The Iron English to provide our blog a world-exclusive update the highly-rated Chessable course.

We shall return to examine the course in greater detail in another post, but now it is time to enjoy Richard’s excellent annotations as he presents: The Iron English – Updated! 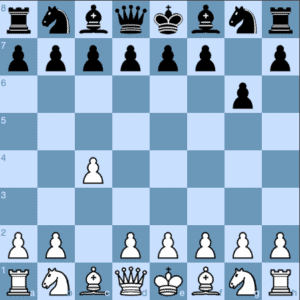 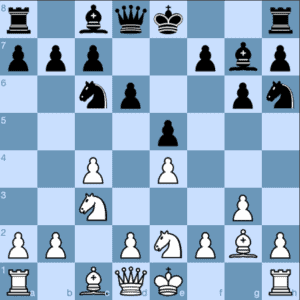 A fairly rare sideline, if one which has gained a bit of recent interest. 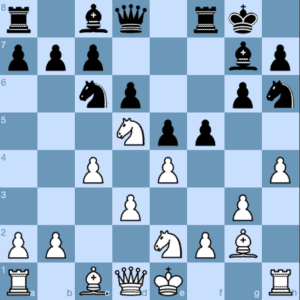 Even here advancing so must be critical, although Black is now able to get out of the way of Harry while preparing to meet h5 with …g5. 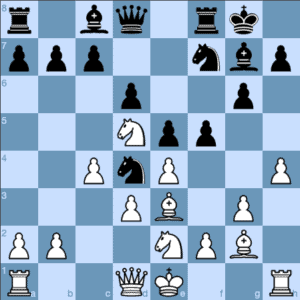 Suddenly White’s once-proud knight isn’t looking so great on d5 with …c6 on its way. Remember that Nd5 works especially well when Black has a knight on c6 and a bishop on e6.

White’s set-up bristles with intent, but unfortunately Black is about to seize the central initiative. 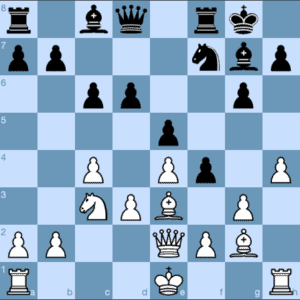 Goganov refuses to be seduced by the pawn on offer and instead keeps things tight at the back.

14…Qf6!? 15.0–0–0 Nd8 is a clever manoeuvre pointed out by the silicon beast, leaving Black with control and a definite edge

Threatening g4. White is quite happy to give up a pawn to open lines and obtain some play. 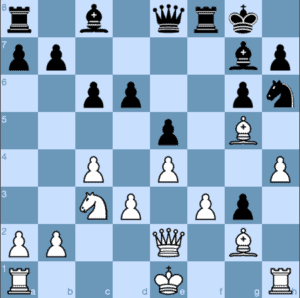 Unlike certain politicians, Goganov recognises his mistake, so backtracks.

Not a move that you get to make too often in the Botvinnik English, but quite in tune with the position here. Which king is going to feel the heat first?

Chigaev continues to counter well, re-routing his knight to eye White’s holes on d4 and f4. 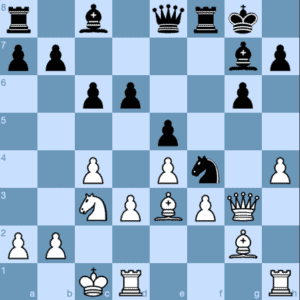 An unstereotyped exchange, but a good one in this slightly worse position. It does leave Black with an unopposed dark-squared bishop, but how else to obtain any play as White, and with Black set to go …Be6 and …b5?

21…Rxf4?! 22.Ne2 would have left White with decent chances of getting somewhere on the kingside, such as with 22…Rf8 23.h5! gxh5 24.Bh3! forcing a positionally desirable exchange of bishops, to deprive Black of the bishop-pair and leave his king looking a little vulnerable, not to mention f5 as a fine outpost for the white knight.

Keeping lines closed, but this was no easy decision as now White will be able to target g6. 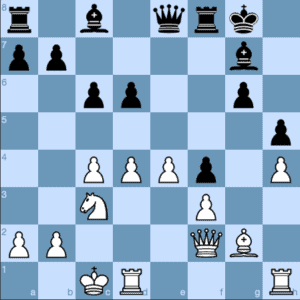 Setting up a big centre and blunting the unopposed dark-squared bishop. The alternative plan was still possible too: 23.Bh3 Bxh3 24.Rxh3. However, here White would have had to take care had Black reacted straight away in the centre: 24…d5! 25.cxd5? cxd5 26.Nxd5?? Qc8+ Whoops! Try to never forget John Nunn’s handy mnemonic LPDO (‘loose pieces drop off’).

Not so much defending c4 as bringing the bishop round into the attack.

Even here Chigaev may have been feeling quite confident, with the bishop-pair and a queenside attack brewing, but he was not to be the first player to rather collapse when everything was now thrown at him. 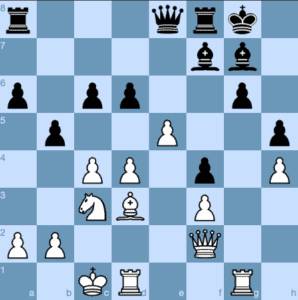 I wouldn’t be surprised if Goganov didn’t consider anything else, but there was also a direct approach: 28.Qg2!? exd4 29.Bxg6. White threatens Bh7+ and can get away with a temporary piece sacrifice: 29…Bxg6 30.Ne4 Ra7 31.Qxg6 Qxg6 32.Rxg6 bxc4 33.Rdg1 Rff7 34.R1g5. This does leave him two pawns down, but extremely actively placed and the engines rather like White’s chances. 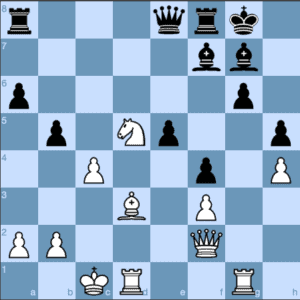 Thematic, especially in time-trouble, but it asks far too much of Black’s position here. 29…Rc8! would, however, have left Black for choice.

The Beginning of the End 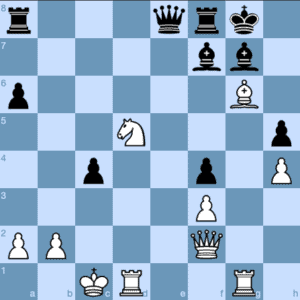 Even stronger than the fork on c7. 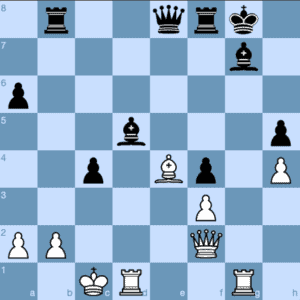 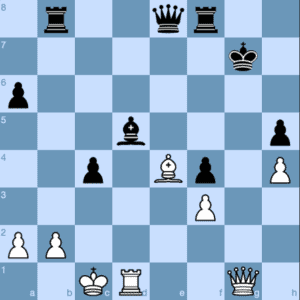 The Iron English: The Reversed Dragon

Richard now turns his attention to a recent game in another very popular line of the English Opening to conclude this piece on The Iron English – Updated! 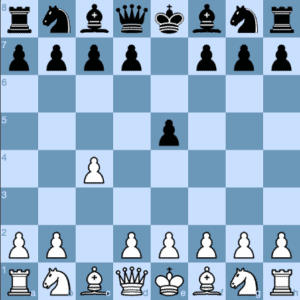 3…Bb4 4.e4!? is or was a pet line of Carlsen’s. Top-level interest seems to have quietened down here for now, but don’t be surprised if this line pops up again this year. 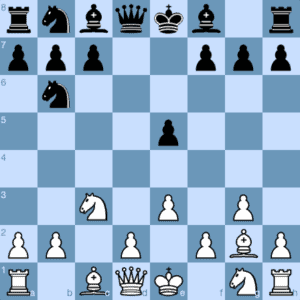 Our repertoire approach in TIE. White refuses to blunt his fine fianchettoed bishop and heads for quite a dynamic set-up with the king’s knight on e2. 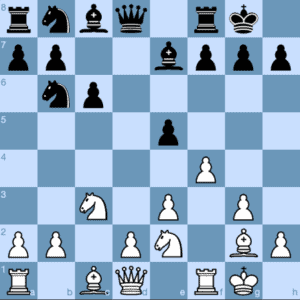 Breaking without delay and just watch how quickly White now gets to dominate the centre.

Direct and far from bad. However, in Line 4C of TIE we preferred another highly thematic idea: 10.b3!, keeping Bb2 and even f5 ideas in reserve. 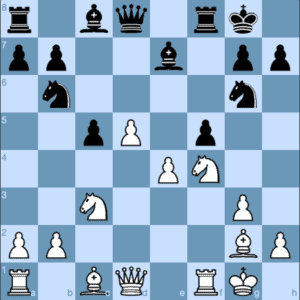 This left White with the safer king and seizing the initiative in Maghsoodloo – Praggnanandhaa, Internet (Blitz) 2020.

We hope you enjoyed The Iron English – Updated! For further information on The Iron English, head for the two courses on the subject by Grandmaster Simon Williams and International Master Richard Palliser. 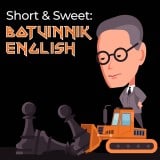 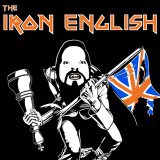 Readers may like to know there is a companion book, The Iron English, available from Everyman Chess and by the same authors. 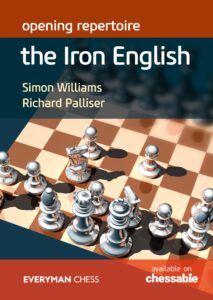 If you ever wanted to add 1 c4 to your arsenal of White openings then now is a good time to do so. The material is all there, just waiting to be used! 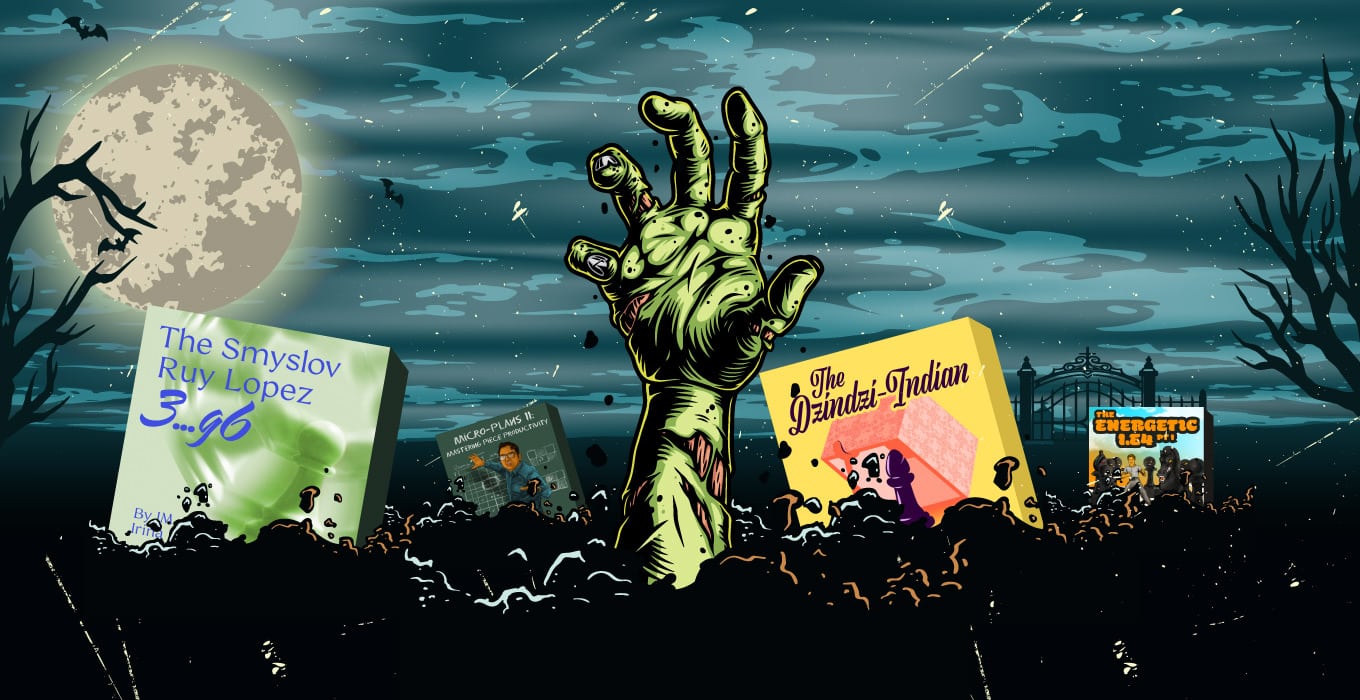 Mr. Dodgy Raises Buried Courses from the Grave This Halloween